The cape coast stadium has received a major renovation after several complaints of its deplorable state.

The Black Stars of Ghana will host Bafana Bafana on Thursday for the 2021 African cup of nations at the 15,000 capacity stadium.

The Central Region Football Association Chairman Robert Duncan had earlier disapproved reports about the poor condition of facilities at the stadium including that of the former head of the National Development Planning Commission (NDPC) Dr. Nii Moi Thompson who described the stadium last year as “a disaster waiting to happen” and criticised the Chinese contractors of doing a “shoddy” work.

Key officials went to the stadium to inspect its readiness ahead of the tie and a positive feedback was seen. 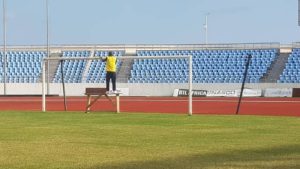 Suzzan Emerges as the queen of NMBG ’18

“We Are In Talks To Sign Richard Boateng,” Real Oviedo Coach...

“Some Clubs Are Dsiturbing Us For The Services Of Adebayor” –...